“Lights! Camera! Action!”: Being A Newbie On Set

After 3 months of working on the marketing for Nice Media, my time came to have a trip out on set. I got to observe one of our eLearning drama shoots. Here is my insight on being new on set…

Meeting time (or ‘call time’ to use production terminology) at the office is 7am. Bleary eyed and clutching a very strong black coffee, I am informed this is a late start. Usually call time can be 4am or 5am in the morning. However, as we’re filming in Brighton not too far from the office, I have got off easily.

First, we have to prep the kit. Bar the cameras, I’m struggling to recognise what most of the kit is and there is much more of it than I imagined.

Once the kit is loaded into the Nice Media car I get a cab from the office to the station to pick up our sound man Dave. This gives me a chance to have a chat with him and hopefully gain some insight on what I should expect from being on set while we drive to the shoot location.

I point to the massive bag Dave has bought with him and politely ask if that’s his sound kit. He laughs and says no, his kit is in the Nice Media car and this is just the blankets. Clearly my face reveals my confusion, ‘Sound blankets’ he says kindly. I’m still none the wiser.

We arrive at ‘The Hub’ (our location for the shoot) and with great excitement I discover a feast of coffee, a variety of teas and, most excitingly, an array of pastries. Two Danish pastries later and I’m told that this isn’t always the case and food provided varies from location to location. So far I think I’ve chosen the right shoot to come on; a ‘late’ start and plenty of pastries. 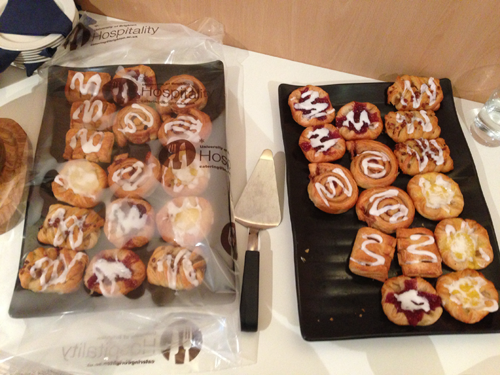 Dave is already in full sound prep mode as we are recording the voiceovers first, before filming the drama. His first job is to make sure any air conditioning is switched off. Not being a production expert, this potential problem had never occurred to me. The professionals explain that it is essential to turn it off so we get the best sound quality. I have to give the team credit – they have exceptional hearing. Every precaution is taken to eradicate even the smallest amount of noise.

I am then enlightened to the use of the ‘sound blankets’. They are used to conceal each actor in a blanket pod/tent like construction to make sure the sound is the best possible quality and any other noise is blocked out while they record the voiceovers. (Apologies for my unprofessional camera phone snaps!)

Before the voiceovers are recorded, there is an in depth discussion about the exact accents that the actors need to be using. The actors need to make sure they have the tone of their characters correct. 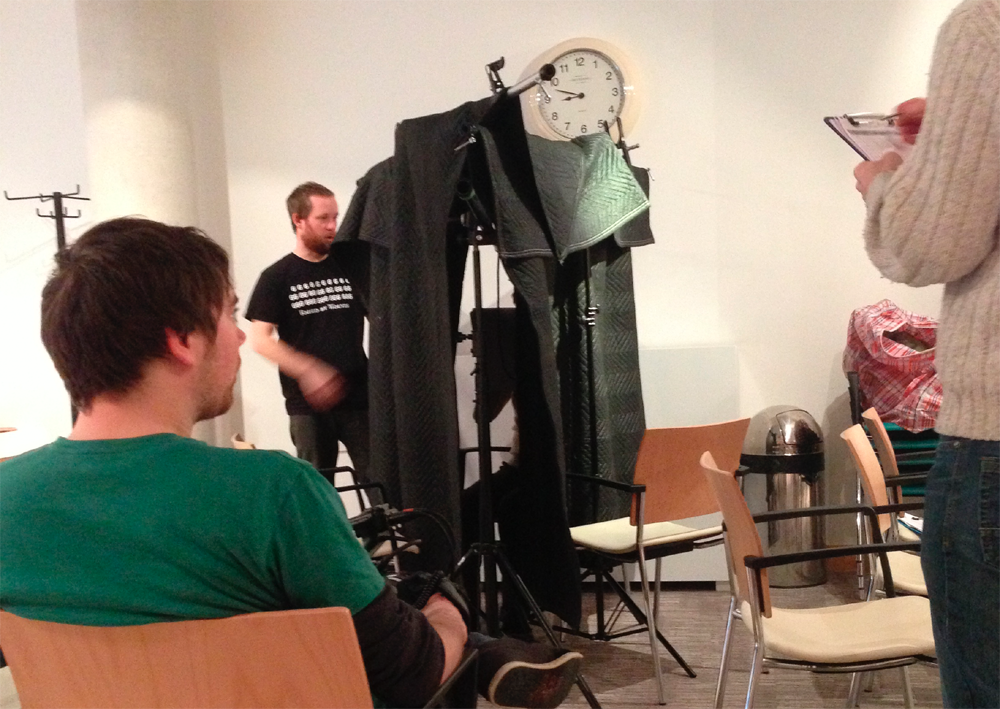 I assumed that the voiceovers would be done by just Dave the sound technician. However, the whole crew is still involved; producer, director and even one of our cameramen take part in making sure they are done as well as possible.

When the voiceovers have been recorded, we set up for the filming. There is much more camera prep and setting up of equipment than I expect. There are script run-throughs. There are checks on the background of shots. Posters are taken down and ones the client has provided are arranged in their place. Every detail is perfected.

Questions are asked about every element of the set. To have coffee pots in the background? Should the actors be holding tea or coffee? Would there already be water glasses on the table? Is the table at the right angle?

We then notice that outside there are some construction men. The costumes provided by our client don’t include hard harts, but we discuss that they could be an asset to the shot (as we are filming rail workers about to go on site).

So I venture out to coerce the builders into lending us two white hard hats for the shoot. After an elaborate plea of how the hats would be a tremendous ‘asset’ to our shoot, I leave victorious with two hard hats in hand. Although, admittedly, I think I was given them out of the builders’ sheer amusement, as opposed to being because of my brilliant skills of persuasion… But, victorious none the less.

However, before we use them in our shoot, we need to 100% check that these hats fit in with the scenes. Our client calls their supervisors to confirm that the white hats are the correct ones their team would use on site. As no part of the drama can be inauthentic.

Once we’re given the go ahead, it’s on to the filming. Each scene is shot multiple times from multiple angles in order to make sure we have the best shots to choose from. 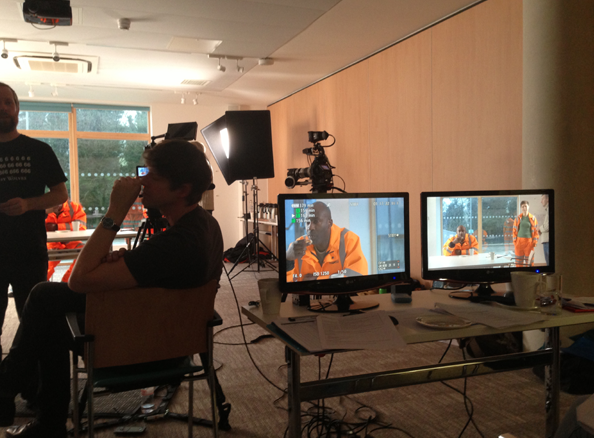 The director focuses on the drama and artistic decisions. The producer is in charge of organising the shoot beforehand and also on the day. They are in charge of making sure we are running on schedule.

Our last shot for the drama is filmed from outside through the window. Earlier when we were filming the action inside it was raining, but it no longer is. So we need to create a rain effect on the windows to ensure constancy. An artistic display of water throwing ensues to effectively create the appearance of rain on the windows.

At 5pm filming is finished, or should I say, it’s a wrap. We then embark on packing away the massive amount of kit. Our Creative Director, Tom Hickmore, provides me with a cable-wrapping lesson. Various anecdotes are shared about times when team members couldn’t wrap the kit’s cables properly. Apparently even packing the kit away is more complicated than I predicted!

Finally the kit is loaded back in the Nice Media car and we’re ready to go. Although I really enjoyed the day, I am now pretty tired. I can’t believe how much work and manpower goes into producing a good quality short video. But it looks like the drama is going to be great and I’m excited to see the final cut once the editing is done!