Sometimes in video production, everything goes smoothly and most of it goes according to plan. And at other times, despite everyone’s best efforts, you end up months in with your key locations suddenly unusable, no time to find new ones and you have to get creative. This is a story about one of the latter kinds of projects.

We were working for a learning agency, producing the video content for a major interactive video course.  The course dealt with the balance between safety and environmental protection for railway maintenance crews. To tell the story, which included trees on railway lines, badger setts and bat roosts, it was clearly going to be tricky to find suitable locations.

After weeks of searching for ideal spots, we identified some prime candidates and went for our recce. And bingo – after a little tweaking of the scenarios, we found some sites that would work. All was well.

We learned that health and safety requirements would not let our full crew onto the site.  We were back to square one.  All this had taken some months and the clock was ticking. So, we came up with a completely new solution.

Tom, Nice Media’s Creative Director, had made some short films using illustrated backgrounds and props, shot against greenscreen. We used this approach as a basis. Working together with the client, we drew up a bold plan that would work in the time and budget available and still hit all of the main objectives.

Our approach was ambitious. It required some smart scheduling and some unorthodox ways of doing things. We got straight into casting, storyboarding and resourcing, while the client got everything rolling on their end, sorting specialist gear and fine tuning the technical aspects of the script.

We worked smart and fast in pre-production.  And before we knew it, the first day of shooting was visible on the horizon, approaching fast.  Then the covid tests came in – we were at the height of the Omicron wave – and a problem arose. One actor tested positive and had to isolate.

Unfortunate. But not unexpected.  Within a few hours we had re-cast and were back on track (pun intended).

Before we knew it, we were in the studio.  Arranged across the wall of our production base were a mix of schedules and storyboards. Scripts lay on tables nearby, next to monitors and laptops, boxes of masks and bottles of hand sanitizer.  Props were organised in a space nearby, including chainsaws, strimmers, shovels and two giant pieces of wire fencing. The client was in the studio. Actors were in the make-up room or eating breakfast nearby. Lights were rigged. We were ready to shoot. 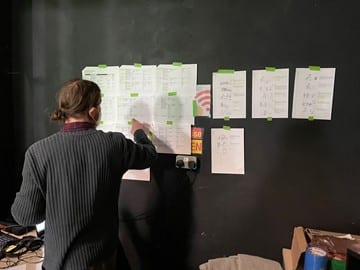 Due to the time constraints, we didn’t know what the final background artwork would be when we started shooting. But we knew the general style: the final scenes would be built from stylised photo realistic images. Our brilliant DOP, Ben Turley, accounted for this by lighting in a fairly neutral way. To give us the ability to create large locations in the edit, Ben and Jason Edwards, the director, filmed separate plates for the foreground and background action in a number of scenes.  This gave our team the chance to easily move and resize different elements within these scenes during post-production. 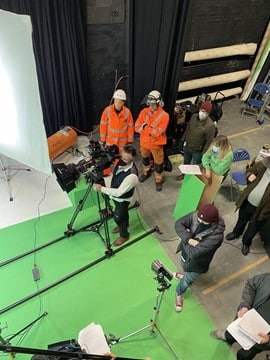 Jason steered magnificently through   a packed schedule, keeping setups as simple as possible without compromising narrative or style and minimising the number of takes.  There were interesting technical challenges to consider in this too: the style was predominantly POV and some of the shots involved camera movement on tracks (using red tennis balls on stands as markers, naturally). Everyone dug deep to pull it out of the bag, over three fast-paced but fun days of filming. 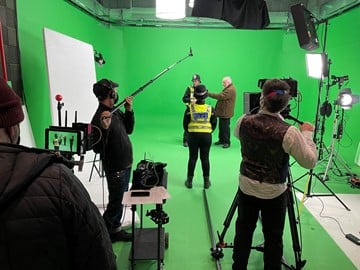 Then, before we knew it, it was over. We were into post-production. Working closely with our direct client’s illustrators and animators, our team built out dozens of individual scenes from the footage, for use across three interactive scenarios. Again, we had to be inventive here: a quick turnaround and the need to retrospectively fit the images to the scenes meant a lot of coordination between the two teams. Both rose to the challenge wonderfully.

Finally, the videos went over to the end-client. We did it. Thrilled with the result, there was well-deserved praise for everyone involved. A project that was hanging in the balance turned around into an ambitious and groundbreaking set of deliverables.

We would love to hear from you with any specific requests for future webinar sessions. Or if you’d like to have an informal chat about a project / project idea, please do get in touch.