In the summer of 2021 Nice Media collaborated with South Central Ambulance Service (SCAS) to produce a series of learning drama videos about dementia awareness. 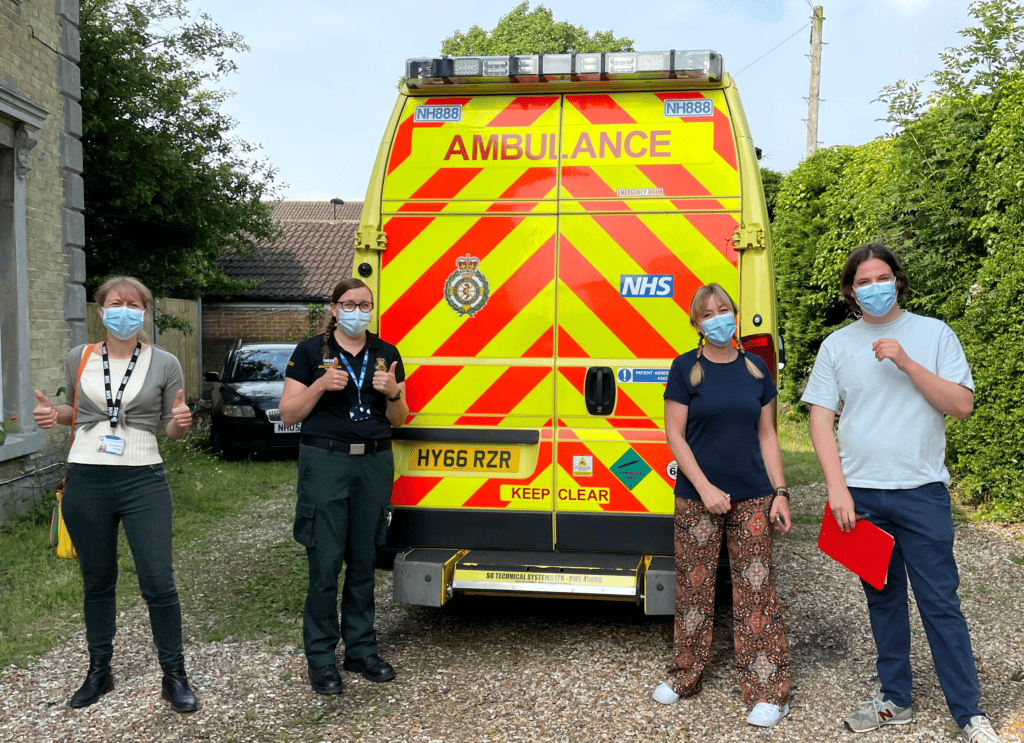 The project came about after Health Education England mandated Tier 1 Dementia Awareness training.  As part of SCAS’s response to this, Nice were commissioned to produce approximately 20 minutes of video content, to be delivered in chunks.  Some video content on the subject did exist, but it was out of date and not sector specific.

The Nice videos were to be used within teaching sessions delivered in person or virtually using Microsoft Teams (or similar platforms) reaching more than 50,000 Ambulance staff (all roles), across several Trusts, including more than 22,000 paramedics.

Chloe Lofthouse-Jones, SCAS Education Manager, had developed a high-level design to support the key objective to make the content relevant to a range of different staff roles across ambulance services. The scenarios would follow the journey of a dementia patient through their interaction with various elements of the ambulance service:

Here, already was the basis of a simple story.  Usually, when designing drama video, Nice put a good deal of development effort into upping the conflict to make it more engaging.  Creating scenarios that are merely illustrative lacks drama and thus audience engagement.  Drama, with its accompanying engagement and stimulation of reflective thinking, is gleaned from challenging situations.

This story design though, was deceptive, because while it seemed banal, it incorporated a lot of conflict and challenge for the characters throughout.  This is because people with dementia are unpredictable – with the potential to offer challenges for staff whenever they are encountered.  So, the scripts used this story structure and were developed to ensure challenges were presented throughout.

After studying all the detailed messaging needed, we wrote scenes to spotlight those grey areas in which an optimal action is unclear.  Drama is about decision-making, so the harder the decisions one presents, the more engaging for the audience and the deeper they will reflect upon the subject matter.  Behaviours that are not a hundred percent correct are also good to include because we’re all human and we want our films to be credible.

There are basic checklists in relation to safeguarding, but staff must use soft skills to ensure they are actioned.  Expertise here is not necessarily correlated with seniority or experience because the responses must be so human-centred and personal.  So, sometimes we showed how a rookie character can get a better response from the patient than his superior.

SCAS were very proactive with the character development that resulted in casting that is both diverse and realistic. 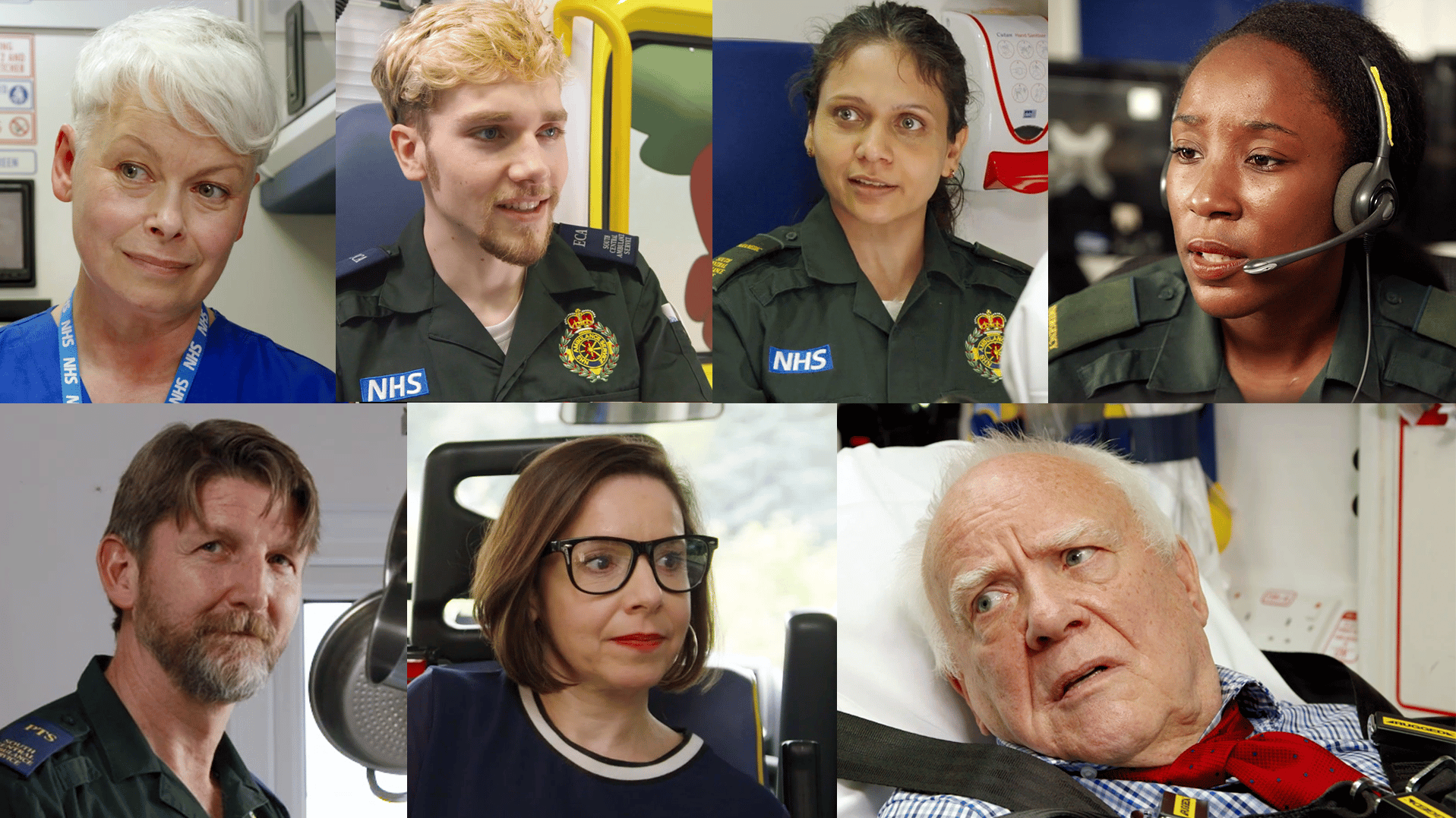 To give a bit more insight into the content let’s look at the opening scene.  An Emergency Call Taker is put through to an old man, Edgar who has had a fall.  We see the call from her point of view and only hear the man’s voice.  The Call Taker asks straightforward questions but gets strange, nonsensical answers.  She tries her best to help Edgar, and all the time we hear the pain and confusion in his voice, while she remains calm and in control.  She tries to follow a script on her screen, but his answers to the simplest of questions can be quite bizarre.  Edgar thinks he’s in his storeroom at work, but in fact he’s in his lounge, and the Call Taker must find her way through this.  At the end of the call, she has a few lines to let out her own feelings about that stressful interview. 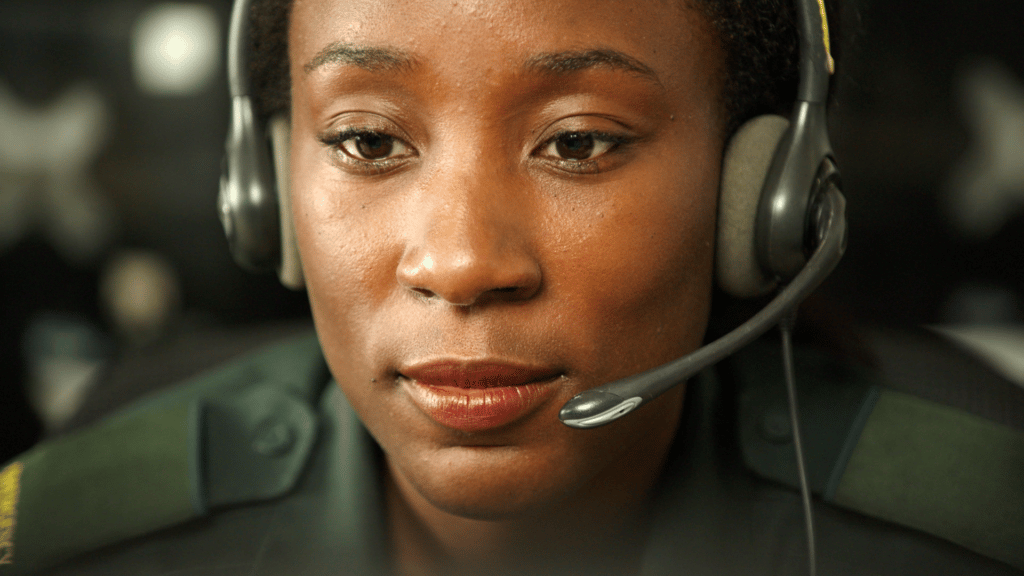 The story continues as the ambulance crew arrive.  They discover Edgar with a potential fracture, lying on his floor surrounded by boxes full of “stock”.  After checking his injuries, they fight with his confusion and fear to get him into the ambulance.  The struggle continues as Edgar hallucinates, panics, and becomes abusive.

The next clip sees Edgar returning from hospital with his adult Daughter accompanying him.  Now, the non-emergency patient transport service character faces the challenge of handling Edgar’s confrontational outbursts and lack of cooperation in front of the Daughter, while simultaneously trying to calm her.  Finally, the non-emergency guy settles Edgar back into his home and explains to the Daughter some aspects of dementia and how best to deal with it.

The ambulance staff characters featured didn’t need to emote very much, because it is their job to be cool in the face of emotional situations.  But Edgar and his Daughter were contrastingly emotional.  This provided the basis for an engaging, dramatic tension.

We believe that the elements we combined added up to more than the sum of their parts, and this was borne out when our team shed a little tear upon seeing the final scene in the video – as the Daughter gives her dad a big hug. 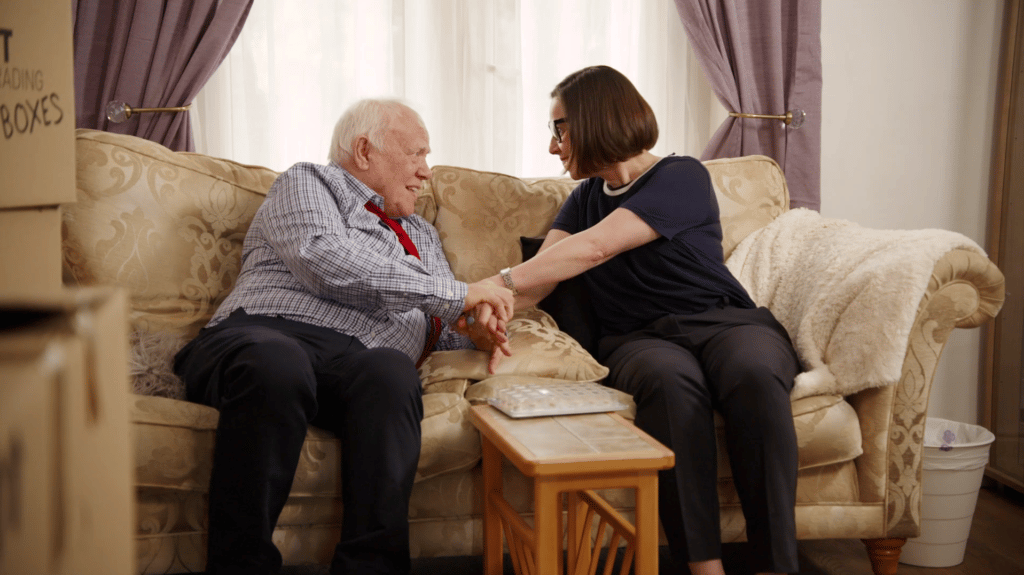 “These training videos will make a huge difference to our crews dealing with patients and service users affected by dementia. By bringing this to life through Edgar’s perspective, we are able to consider the whole picture, and tailor our approach accordingly. The actors perform a powerful and lasting image that allows ambulance staff to consider all perspectives in the treatment of dementia…”

“What I liked is that these videos are realistic and actually feel like real life scenarios that [ambulance] crews would go to. They were informative and dealt with the issues raised respectfully. The opportunity for discussion afterwards means staff are included in the learning process. This will be really beneficial as we can share and listen to different viewpoints on the videos and learn from each other’s experiences.”

“These videos will be particularly useful for new staff [in the ambulance service] who may not have met a person with dementia before, to give them an understanding of how we can support patients who are confused or distressed.”

This project was a finalist and winner in the 2022 Learning Excellence Awards.