Will You Fit Into Deloitte – A Celebration

Three years after it was made the interactive video Will You Fit Into Deloitte is still regularly cited as an exemplar for corporate video makers.  In this article, I will discuss the mechanisms this excellent video uses and explain how they work with reference to the common functions and devices of recruitment videos.

If you’ve not seen the video yet, I suggest you have a quick look now. 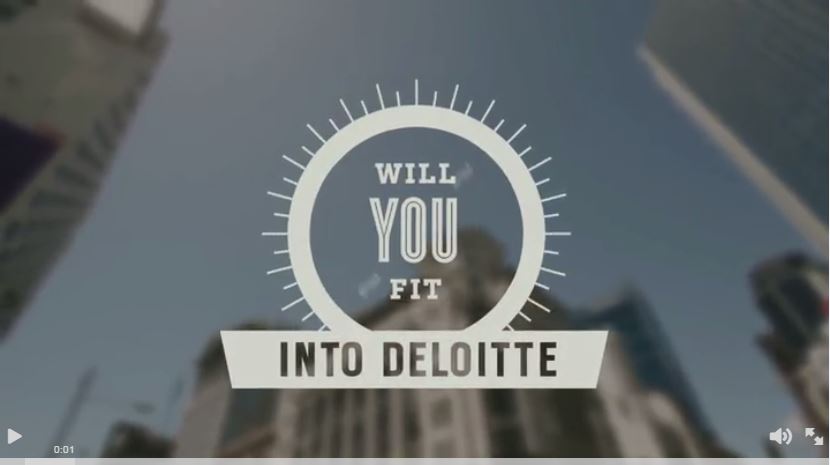 Before I start, it’s worth noting that there is a continuum between the recruitment and onboarding function.  After all, if candidates start the onboarding process when applying you can get them up and running faster if they become employees.

Voices from your colleagues

Video is a great tool for showing the workplace.  A candidate can see and hear their future colleagues and get a believable account of what a workplace is like.

A high proportion of recruitment videos feature interviews with a cross-section of the workforce giving informal insights into what it’s like to work here, or discussing the company values and how they work for them.  By this means a video can combine 2 types of messaging – a display of the lovely workplace and colleagues, combined with an insight into the culture and values.

The Deloitte video takes this idea and gives it a twist.  We see the Deloitte workforce, but they are acting.  Better than that, they are play acting.  They are playing with you as the interactive viewer.  Their play acting is an exemplar of how they cooperate at work.  You are literally watching them work, and it’s playful. They’re not taking themselves too seriously.  The people on screen are collaborating to put across the company message.  Deep stuff.

The video also takes you outside the workplace into the hills, exercising with your colleagues.  It shows the hinterland and physical setting of the work experience.

Video is a good tool to motivate people to work for you and to discourage people who won’t be suitable.  This is about brand values and your mission.

Sometimes a brand message is articulated with interviews with the founder or CEO.  This person can take the company mission and make it personal.  There’s also an extra level of subtext – it’s my baby, it all rests on my shoulders, don’t join if you don’t buy in to it.  This also functions to deter the unsuitable.

In the Deloitte video where is the authoritative brand message?  It’s there, but it’s hidden.  It’s woven into the fabric of the film.  Although the film is light-hearted, it’s a test of values.  Will you fit in?  It’s a challenge and you must rise to it.  And because of the interactions you are reminded of this again and again.

Why is it so good?

Will You Fit Into Deloitte is a great video.  It’s filmed and edited with great skill, but this isn’t what makes it good.  It’s well scripted, but even this isn’t the key to its excellence.  It has good visual design, but this is also a commonplace.  What’s rare about the piece is the high-level design.  A conception that seamlessly integrates all the main functions of a recruitment video into an enjoyable confection.  It’s a design that articulates serious issues with a humorous touch.  A design that uses drama – depicting conflict without fear.  A design that enables Deloitte staff to collude with the filmmakers and viewers, to perform and to come out looking good.  It’s a great synergistic bit of thinking.

A point of view

What about the function of the literal point of view that the camera takes?  What’s going on here, why does it work and would it work in other contexts?

It might seem an obvious way to film this subject matter.  You are imagining being the new starter, so let’s film it “through your eyes”.  This is a good starting point for using the method, but we should not overlook the associated effects of this device.  Literal point of view makes the viewer aware they are watching a film.  It’s not immersive in a dramatic sense, not empathic.  The device pushes us back and puts us in the position of a critic.  This position is ideal for comedy, because comedy is a form of criticism.  And it’s good for learning as well, because a critical position is a thoughtful one.  And, of course, this position also works with the gamified structure.

These self-aware effects work well with the performances of the Deloitte staff.  The filmmakers have set up the staff so their flawed and amateur acting comes across as a knowing and playful collusion with the viewer.  If the same content were filmed in a more conventional way we would more easily see the acting as just bad.  And this effect works in two directions, the playful performances, looking directly into the lens, make us feel a privileged part of a cool team.  We are literally playing with our future colleagues.  We want to fit in.

Finally, credit must go to the Deloitte team in New Zealand who commissioned this piece.  They invested in experienced filmmakers who knew what they are doing and it paid off.  They produced something brilliant and achieved unprecedented success with the video going viral.  Surely an unexpected and welcome, extra return on their investment.